Modern Chinese Literature and Culture is a peer-reviewed, multi-disciplinary cultural studies journal. In addition to literary studies, MCLC publishes on a broad range of subjects from film to popular culture, to performance and visual arts, to architecture, to regional cultures, to print and material cultures. Our view of culture includes the elite and the popular, the visual and the literary, as well as the less “textual” culture of everyday life. The journal encourages the use of photographs, graphics, film or video stills.
“We see it as a very important mission of the journal to communicate to those outside our field the globally-important issues involved in the culture of Taiwan, Hong Kong and the People’s Republic of China.” “to communicate their work to an expanded constituency, to challenge the way China is represented in the Western media, and to help a broad intellectual readership come to a deeper understanding of issues related to modernity and its cultural formations in China.” 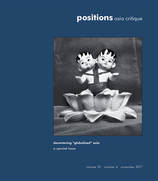 Duke University Press
​Senior Editor: Tani Barlow, Rice University
Frequency: Four issues annually (Feb, May, Aug, Nov)
No. of articles per issue: 5-9
Word/page limits: 19-32 pages including images, plus endnotes and reference
Submission: http://www.editorialmanager.com/pos/default.aspx
In print and indexed on Project Muse
Description: "Offering a fresh approach to Asia scholarship, positions develops theoretical, philosophical, historical, and critical approaches in a forum open to debate. In expansive scholarly articles, commentaries, poetry, visual art, and political and philosophical debates, contributors consider a broad variety of pressing questions. Thematic issues tackle new, sometimes pathbreaking areas of concern (or traditional areas from a fresh vantage point) and are interspersed with general issues offering scholarship that calls our scholarly assumptions into question and expands our various archives. The breadth and pace of the journal ensure that readers seeking to add "Asia" to their areas of critical competency are included in our debates, challenged and informed"

Journal of Chinese Literature and Culture

Duke University Press
Editor(s): Xingpei Yuan, Zong-qi Cai
Frequency: Two issues annually (since 2015)
https://www.dukeupress.edu/Journal-of-Chinese-Literature-and-Culture/
The Journal of Chinese Literature and Culture publishes research articles and essays on premodern Chinese literature and all aspects of the broader literary culture. It also publishes work that explores the influence of traditional literature and culture in modern and contemporary China. For some periods of the twentieth century, the study of premodern Chinese literature was considered by some an impediment to the rise of science and democracy, but it is now recognized in China as a valuable heritage that can enrich Chinese culture for the twenty-first century. Jointly sponsored by Peking University and the University of Illinois, the journal is committed to an international editorial vision and to in-depth exchange and collaboration among scholars in China, the United States, and other parts of the world. 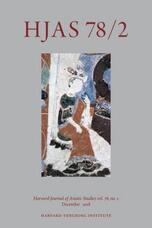 Duke University Press for Lingnan University of Hong Kong
​Frequency: biannual
Editors in Chief: Zong-qi Cai, Yunte Huang
A general issue appears in March, and its submission deadline is April 1 of the preceding year. research on modern literary production, dissemination, and reception in China and beyond. It also publishes works that study the shaping influence of traditional literature and culture on modern and contemporary China. Prism actively promotes scholarly investigations from interdisciplinary and cross-cultural perspectives, and it encourages integration of theoretical inquiry with empirical research. The journal strives to foster in-depth dialogues between Western and Chinese literary theories that illuminate both the unique features of each interlocutor and their shared insights into issues of universal interest. Prism is a new incarnation of Journal of Modern Literature in Chinese (JMLC), founded in 1997 by the Centre for Humanities Research of Lingnan University. For submission guidelines and a more detailed description of Prism, visit prism-journal.org.

Frontiers of Literary Studies in China

JAPSS Press for the Guild of Independent Scholars
Frequency: April/May and November/December/January
http://www.japss.org/Journal-Asia-Pacific-Studies.html
The Journal of Asia Pacific Studies aims to serve as an outlet for research dealing with the interdisciplinary field of Asia Pacific Studies. As one of the most dynamic regions in the world, the Asia Pacific is of interest to a vast array of scholars and practitioners from many fields. Interest in the region is no longer limited to a few elite centers in the Global North but rather has spread to Latin America and other regions of the developing world. Moreover, Central America has started to look East as a way to diversify its traditional reliance on the Atlantic and North America. It is the hope of the Guild of Independent Scholars that the Journal will provide a link between the two regions and serve as a mean of communication for scholars and practitioners interested in Asia Pacific Studies. Since the field of Asia Pacific Studies is at an early stage in Central America the Journal aims to have an effect not only in the academic community but also at the policy making level. Thus, policy oriented papers will be given priority and the Journal will be distributed among the policy making community of Central America.

Intellect (UK-based)
Frequency: 3 issues per volume (since 2015)
http://www.intellectbooks.co.uk/journals/view-Journal,id=238/view,page=0/
The East Asian Journal of Popular Culture is the first academic peer-reviewed journal for scholars, teachers, and students from around the world who have an active and passionate interest in the Popular Culture of East Asia. The journal is devoted to all aspects of popular culture in East Asia and the interplay between East Asia and the wider world. With the growth in popularity of Asian visual products in the Western world and the increasing strength of the Asian markets, this publication fulfills the need for an international journal that allows Western and Asian film, media, literary, music, fashion, digital media, television, art and cultural scholars alike to engage in discussion.